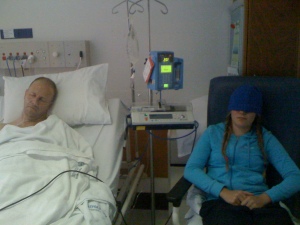 It began with a crisis. Taken to hospital, rushed through Emergency, hooked up to an ECG machine, off for x-rays, back for a CT scan, a massive fluid build up around the lung… looked like there could be a tumour. A whirlwind of people, activity and emotion. Within hours people were visiting, offering help, gathering to pray, preparing meals, picking up cars, contacting children. Within days I’d become the centre of attention, everywhere, it seemed! It was confirmed that I had cancer and the prospects didn’t look good. So many people from so many places turned up to see me. The nurses complained that there were too many people. Letters, cards, Facebook greetings, emails, came in from all over. Meals kept turning up at the right times. A small army of people unpacked our belongings and refurnished our house. Fifteen hundred students gathered in small groups at a conference to pray for me! It was intense! It was life and death in our faces every day.

I’ve seen our family cope pretty well with a crisis. We’ve had a few now! We made some very big decisions very quickly. We put new plans into place. We made the adjustments. We had the tough conversations without too many problems. We just did what we had to… and coped. We enjoyed the support from others. We were conscious of God’s strength and comfort and we prayed a lot.

Things have changed. The pace has slowed. The crisis has gone and left us with the chronic. It’s become three weekly by three weekly, rather than day by day. Life is now shaped by chemo cycles. One week sick, two weeks better. One week sick, two weeks better. On and on. It’s exhausting and we don’t seem to be achieving much else in life. Sometimes we feel like we’re just drifting with the current or stuck in a rut going nowhere. It’s not so much action that’s needed now, but patience and perseverance and gentleness and self-control. And that seems so much harder. It doesn’t come naturally. We absolutely need the help of God’s Spirit.

But the fruit of the Spirit is love, joy, peace, forbearance, kindness, goodness, faithfulness, gentleness and self-control.  (Galatians 5:22-23)

In many ways the excitement of the crisis has given way to the mundane of the chronic. The daily grind is hard work. Perhaps, even more challenging than the mountain climb. In the crisis I think to pray. In the chronic I’m more tempted to forget. Gratitude easily gets replaced with grumbling. Matters of eternity give way to matters of trivia. Urgency steps aside for complacency. I can forget to number my days and begin again to take for granted my months or even years. Oh, how slow to learn I can be!

I think it’s harder for others also. Initially, people were making every effort to visit, bending over backwards to offer support… as we tend to do in a crisis. But as time goes on it’s harder to sustain the effort. Life fills up, another crisis gets in the way, we have our own lives to look after. We forget to drop in, make the call, check up on each other, see if there is anything we can do.

To be honest, it can be rather lonely having a chronic illness. You feel just as sick and powerless and needy, but you’re pretty much left to manage on your own. There’ve been times when I’ve felt disappointed in people. Why haven’t they called? It wouldn’t be too hard to drop in. It’d be awesome if they’d just ask Fiona if there’s anything they could do to help. I long to hear what’s going on in people’s lives. I’m interested in knowing about work or family or the latest sporting achievement. I’d love to have people offer to come and pray with me, or read the Bible and talk about stuff. Hey, I’d even be up for a regular game of real Scrabble! Even a quick phone call just to say they’re thinking of me!

I shouldn’t whinge. Fiona tells me I shouldn’t write posts when I’m feeling revolting from chemo and she’s probably right! I have so much to be thankful for and I keep being overwhelmed by how many people tell me they’re praying for me. But, I’m trying to be honest and I’m learning lots about myself as well. As I reflect on many years of pastoral ministry, I don’t think I had begun to appreciate what it was like for some people struggling with chronic issues. People with physical or mental disabilities, people with CFS unable to get out of bed for much of the day, women with debilitating pregnancies, people without transport or living in nursing homes. I had so many opportunities to be an encouragement to others that I simply overlooked. As a pastor, I was always up for putting on my superman cape and dealing with a crisis… but the chronic was often forgotten. Out of sight, out of mind perhaps.

Jesus is the Pastor Supremo. He came to overcome our alienation from God, which is the biggest crisis we will ever face. He did so at enormous personal cost, sacrificing his life on the cross to bring us reconciliation. But we also see Jesus caring for those with chronic disabilities, people who are outcasts and isolated from others. He was willing to hang with lepers, prostitutes, tax cheats, and those despised by the religious leaders of his day. Jesus had a pastoral heart that didn’t overlook the needy and he called those who follow him to have the same attitude.

Then Jesus said to his host, “When you give a luncheon or dinner, do not invite your friends, your brothers or sisters, your relatives, or your rich neighbors; if you do, they may invite you back and so you will be repaid. But when you give a banquet, invite the poor, the crippled, the lame, the blind, and you will be blessed. Although they cannot repay you, you will be repaid at the resurrection of the righteous.”  (Luke 14:12-14)

Here’s a thought. Next time you think of putting on a BBQ, think about people you know who might rarely get invited out. Are there lonely people at work or church who’d love an invitation? Perhaps, there’s someone who’s not well and you can make a special effort to include them. Maybe even offer to take the BBQ to their place if that’d make it easier!

On another occasion Jesus told a parable to describe those who belong to him and those who don’t. They’re challenging words.

“Then the King will say to those on his right, ‘Come, you who are blessed by my Father; take your inheritance, the kingdom prepared for you since the creation of the world. For I was hungry and you gave me something to eat, I was thirsty and you gave me something to drink, I was a stranger and you invited me in, I needed clothes and you clothed me, I was sick and you looked after me, I was in prison and you came to visit me.’

“The King will reply, ‘Truly I tell you, whatever you did for one of the least of these brothers and sisters of mine, you did for me.’  (Matthew 25:34-40)

The mention of brothers and sisters shows that Jesus especially has in mind the way Christians are called to treat each other. If we’re part of the same family, then we’re called to love our siblings. There’s a lesson here for those of us in churches to care for one another in our times of need. It should never be out of sight out of mind. But, I wouldn’t be too quick to say this stops with how Christians should treat each other. We’re called to do good to all, as we have opportunity. Do you know someone needing a place to stay? Is there neighbour down the street who never gets visitors? Is there someone at work going through a difficult divorce? Is there old friend with CFS who’s been doing it tough for so long that they’re embarrassed to even mention it? Do you know a single mum who never gets any time to herself? Would a friend appreciate you doing some shopping, spending time in the garden, running a few errands, taking the kids for a while? Is there someone you should get onto right away, just to check they’re doing okay?

How can you make a difference?

This entry was posted in Journey with cancer. Bookmark the permalink.